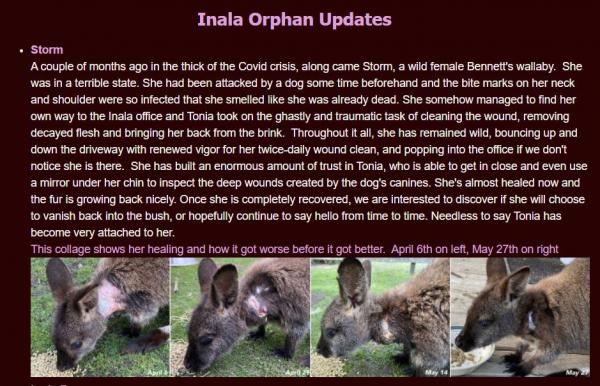 Storm
A couple of months ago in the thick of the Covid crisis, along came Storm, a wild female Bennett's wallaby.  She was in a terrible state. She had been attacked by a dog some time beforehand and the bite marks on her neck and shoulder were so infected that she smelled like she was already dead. She somehow managed to find her own way to the Inala office and Tonia took on the ghastly and traumatic task of cleaning the wound, removing decayed flesh and bringing her back from the brink.  Throughout it all, she has remained wild, bouncing up and down the driveway with renewed vigor for her twice-daily wound clean, and popping into the office if we don't notice she is there.  She has built an enormous amount of trust in Tonia, who is able to get in close and even use a mirror under her chin to inspect the deep wounds created by the dog's canines. She's almost healed now and the fur is growing back nicely. Once she is completely recovered, we are interested to discover if she will choose to vanish back into the bush, or hopefully continue to say hello from time to time. Needless to say Tonia has become very attached to her.
Lady Poss
Dearest Lady Poss, our grand old one-eyed lady passed away in March and we laid her to rest amongst the Wollemi Pines in the Jurassic Garden.  She died peacefully in her sleep tucked in her little hay-lined bedroom, presumably of old age as she never wanted for anything. We will certainly miss running around after her after more than 3 years. Here is the link to the wee video with her story.
Clover and Daisy
Both our littlest orphaned girls are bigger and more confident than ever, on track for an excellent spring release.
Rose
Known also as the 'supervisor' for her daily interest (=nosiness) in everything that is going on in every corner of the property (including inspections inside the office), Rose is doing very well and from the wee bulge in her belly, we suspect she has another joey growing in her pouch.  We have not seen last year's joey 'Buddy' for a few months and hope he is doing well in his own wild mob. Rose comes and goes as she pleases.
Monday, Judy and Adam
Monday adopted Adam as her own and together with her joey Judy (named after Tonia's darling aunt), they are an adorable trio.  After Monday's mouth infection, she learned to scoop up her soft mash of nutritious wallaby pellet porridge with her paw, rather than putting her mouth to the bowl.  This technique has been learned by Adam who now copies her and also eats his mash the same way (although Monday is right-handed, while Adam is a southpaw).  We have never seen Pademelon do this before, to have them both doing it at once is so unusual and very sweet to watch.  Here is the link to the wee video to watch them eating