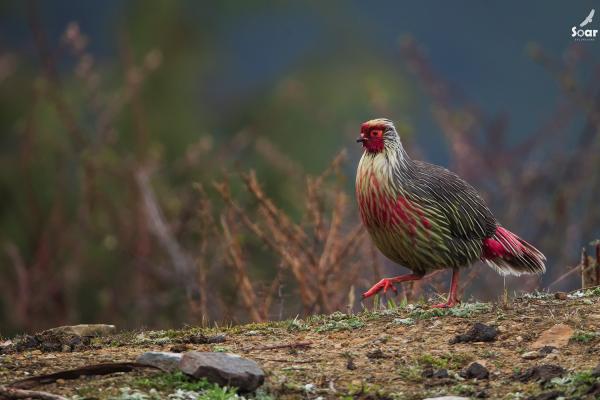 We are very excited to announce Inala's first tour to India and Bhutan - Guided by Tonia and with local specialist guides.

Indian state of Gujarat is rich in diverse flora and fauna. For birders, it is a paradise. Around 500 bird species including 55 species that are endemic to the Indian subcontinent and around 30 globally-threatened and 15 near-threatened species. The vast openness of the landscape and large numbers of birds also make it a great destination for bird photographers.

Bhutan is a breathtaking mystical land situated in the Himalayas neighbouring China and Nepal. In a region known for its stunning scenery, pristine rivers flow through the main towns of Paro, Thimphu (Bhutan’s capital city) and Punakha. Over 670 species of birds have been recorded here, including several range-restricted and highly sought-after species. Tourist quotas are also restricted, adding to the exotic specialness of this magical land.

Our brand new Uganda Tour is also now on the Inala website.
Following on from Tonia's fantastic trip to Uganda last year, we are delighted to announce two trips in 2020, both to be led by Tonia and local Ugandan birding and wildlife guides.
Before we even launched this tour we had three confirmed bookings, so jump in quick to secure places for your preferred date for a trip to this truly incredible part of the world.

On this tour we will be focussing on the Sichuan Province of China, which is world-renowned for its birds and wildlife, particularly game birds (pheasants, partridges, tragopan and grouse); many of these are range-restricted species…and spectacularly beautifully coloured. Much of the tour will be in the sparsely populated areas at altitude in the western part of Sichuan near Tibet, including the Tibetan Steppes which is teeming with wildlife and birds and which live quite happily with the human residents there (mostly yak and sheep herders). During this tour we will also learn of the conservation initiatives for two threatened mammal species, the Giant Panda and Golden-snub-nosed Monkey which are both restricted to a small area of south-western China, almost exclusively in Sichuan. Other mammals we will have a good chance of seeing are Tibetan Fox, Himalayan Marmot, Pikas, Takin, Tibetan Macaque, Reeves’ Muntjac and Chinese Goral are all good possibilities. Hog Badger, Grey Wolf, Yellow-throated Marten, Asian Black Bear Chinese Serow and Tufted Deer are also possibilities. The province is also famous for its wildflowers, boasting several hundred different species of rhododendron and a myriad of orchids as well as countless alpine species. We have also included some cultural activities such as visits to ancient Buddhist monasteries and Tibetan temples and a dinosaur museum for which China has recently become famous because of the sheer number of fossils being found here. We have designed this as a well-rounded tour with something for everyone. Tonia explored this area in May 2019 and listed almost 300 bird and 20 mammal species during her 2-week stay there and returned raving about the location, the people and the amazing opportunity to offer a tour in a little-known part of China where very few Westerners visit.

The international wing of Inala is growing rapidly, do have a look at all the International tours on offer on the website

Putting together thoughts for future tours

Have you ever dreamed of going to a special destination but haven't yet worked out the best way to get there or how to go about visiting? Our international tour offerings began as requests by our guests and we are always open to suggestion about further developing our future tour locations. Tonia has developed a vast network of colleagues from around the world over the past 25 years, so please let us know and we can look into possibilities for those areas.