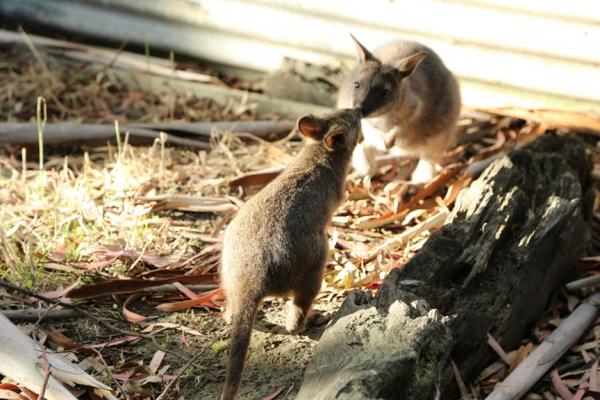 As most of you know we busy ourselves with a range of conservation issues here at Inala, one of which is tending injured and orphaned wild animals. The combination of Tonia’s biological and agricultural background, plus her years of experience as an animal carer, ensure that all animals that come into our care are well looked after. The Inala office team carers, Sue and Emma, have also been tremendously dedicated over the years, and without their help many of these poor critters would not have made it.
Last years’ babies, two Bennett’s wallabies (Mac and Monique), and 3 Tasmanian pademelons (Monday, Morina and Mangana), are now almost ready for release.

We are already gearing up for the spring ‘baby season’ when we are at our busiest. Presently, we have in our care a young male common brushtail possum who was found almost dead from starvation a few weeks ago. We suspect he was hand-reared and released, and just couldn’t make a go of it on his own, so we are giving him a second chance. He is recovering well and nearly ready for release.

Our thanks also to Craig Webb at the Raptor Refuge Centre (http://www.raptorrefuge.com.au/) for his valiant efforts to save an injured Morepork (Tasmanian Boobook) which was handed to us by council workers. Found on the side of the road, and probably a victim of collision with a vehicle, both legs were paralysed but otherwise unmarked. We were all hoping that it was severe bruising but unfortunately the bird showed no improvement over several weeks of care confirming our worst fears of paralysis, and had to be euthanized. Craig and his team do a great job and we are lucky to have them close-by for expert advice on raptor care.