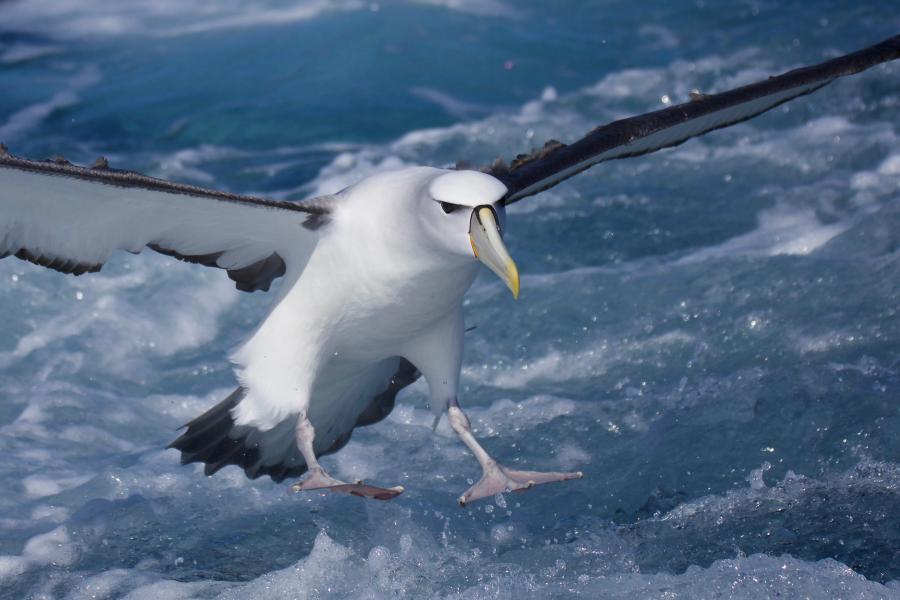 Shy Albatross - Pater Vaughan - Inala Nature Tours - Pelagic
Enquire about this tour
Duration:
1 day
Price:
'Contact us'
Highlights:
Please click the Itinerary tab above to see the available dates etc. NOTE: We only run Pelagic Tours on certain pre-set days, not on demand. We incorporate Pelagics into many of our fantastic Tasmania tours and we are able to offer the remaining extra seats at a break even price. Species vary depending on season and weather, yet it is always a fantastic day out on the continental shelf with a great selection that could include several species of tiny storm-petrels skipping from wave to wave, albatrosses, giant-petrels, petrels, prions and shearwaters...... This is a birding-centric pelagic tour, but of course there is also magnificent scenery and diverse oceanic wildlife to be seen in this special corner of Tasmania.
Overview:

Please click the Itinerary tab above to see the available dates etc.

NOTE: We only run a select number of Pelagic Tours on certain pre-set dates, not to demand.
All Pelagics are part of longer tours, some 2 day seabird & wader tours and some 9 day endemics tours
Sometimes we are able to offer the few remaining extra seats for Pelagic only at a break even price.

All booking are first come first served and we cannot hold a booking without a deposit or full payment, we have standby lists for each tour which you can join if you wish in case of cancellations.
See here for Terms and conditions - We will fully refund any tour that does not run due to weather and will keep you informed in the preceeding days.  We strongly recommend that you take out travel insurance when booking your trip to cover you for any financial losses incurred as a result of cancellation due to unforeseen circumstances.

NOTE: We only run Pelagic Tours on certain pre-set dates, not to demand.
We incorporate Pelagics into many of our fantastic Tasmania small group tours and sometimes we are able to offer the few remaining extra seats at a break even price.

Our Inala Pelagic Tours are on specific dates and are not run to order unless you have a large group ( 8 pax + )  please review the set dates above and get in touch if they suit.  We charter a fishing boat with an experienced captain who takes us to the edge of the continental shelf.

Each tour will have a specialist Inala guide on board who will spot and help identify wildlife throughout the day.
Photography is possible on board although we can take no responsibility for your equipment.
After a tour we send a list of the days sightings for you to keep as a record of your day. (See the trip report tab above for a report on a recent tour )

There are several pricing options avaiable listed below, from just the pelagic, to packages with accommodation and meals included.  When you contact us we will give further information and obtain rooming / dietary information if required.

Make your own way to Eaglehawk Neck to join the group at 7am pelagic departure, returning to shore at approx. 3pm
Takes at least 1hr 15min to drive from Hobart – We recommend to budget at least 1 hour and a half in case of delays

Lunch is not included so you will need to provide your own lunch and snacks.( Packed lunch $20 extra pp )

The package includes one night accommodation on the preceding night at Lufra hotel (8min drive from jetty), breakfast, dinner & Pelagic with Inala guide on board.

Make your own way to the Lufra Hotel the night before and your own way from the hotel to the jetty on the day of the pelagic.
Dinner will be joining the Inala tour group with 2 courses included (chosing from a pre-set selection) at approx. 6.30pm (TBC)
Continental breakfast is organised with the hotel to be available from a very early hour.
Packed Lunch ($20 extra pp if requested) is provided by the hotel and is usually sandwiches, fruit, chocolate bar and a drink (dietary requirements catered to)

3) Pelagic day tour with transfers from Hobart (subject to guide & vehicle availability, e-mail us for availability and prices)

Included, full day of guiding with specialist Inala birding guide, transport for return trip to Hobart (pick up and return from your accommodation in Hobart or airport if your prefer).  Quick breakfast pickup on journey to Tasman Peninsula (If requested) Packed lunch on board.

There had been four days of consistent southerlies leading up to the trip, with more forecast on the day.  We got the southerlies and they were stronger than expected, which made us optimistic of seeing a few Pterodromas.  We didn’t expect to be among so many, as we again had a steady stream of Mottled Petrels, interspersed with Cook’s and Gould’s Petrels, heading south all day.  We were also very pleased to have a close fly-by from a Little Shearwater, an uncommon species in Tasmanian waters, and close passes from 3 Buller’s Shearwater.  3 Long-tailed Jaeger gave great views feeding in the slick for extended periods and the immature Salvin’s Albatross was an interesting record for this time of year.  Other birds of note were a few White-headed Petrel and a distant Providence Petrel.  It’s interesting to note that Grey-faced Petrel, generally the most common Pterodroma petrel encountered off Eaglehawk, has been in very low numbers this season.  Of all the Pterodroma petrels recorded this summer, only Soft-plumaged Petrel and Kermadec Petrel have been recorded in lower numbers.

Left port at 0715 hrs and headed straight down to the Hippolytes.  After cruising by the northern side with a couple of passes to view a pair of sea eagles on a ledge and to check the gannet colony, we headed south-east to the shelf-break, pulling up over 340 fathoms at 0945 hrs to berley.  We drifted roughly north-east, out to 460 fathoms, before heading back to port at 1240 hrs to dock at around 1500 hrs.

The sea was almost glassy as we left Pirates Bay in the morning, with the wind below 5 kn.  Skies were partly cloudy but it was dark and overcast to the south-east.  As we neared the Hippolyte, a south-westerly breeze to 10 kn met us and the swell picked up to around 1 metre.  Offshore, the south-westerly topped 15 kn with the swell over 1.5 m and seas were choppy.  It was similar in pelagic waters but the wind lifted again to 20 kn.  From around 1000 hrs the, the wind back off to 10 kn and the swell dropped to 1 m and things were a bit more comfortable.

Australian/New Zealand Fur Seal: 38 (12) 37 on Cheverton Rock and the Hippolytes in the morning and 1 pelagic.

White-faced Storm Petrel: c. 30 (22) Mainly pelagic with a single bird over 55 fathoms in the afternoon.

Black-browed type Albatross: 2 (1) 1 adult and 1 immature offshore in the morning.

WHITE-HEADED PETREL: 3 (1) All in pelagic waters.

PROVIDENCE PETREL: 1 Pelagic.  A distant bird identified from photographs after the trip.

COOK’S PETREL: 7 (1) All birds flying southwards in pelagic waters, some giving great views as they made multiple passes of the boat.

BULLER’s SHEARWATER: 5 (1) A couple of these birds gave excellent, close views.  3 pelagic; 2 offshore in the afternoon, the second of which was over just 51 fathoms.

Fluttering Shearwater: 6 (2) 4 inshore in the morning; 1 pelagic; 1 offshore in the afternoon.

Hutton’s Shearwater: 1 offshore in the afternoon.

Fluttering-type Shearwater: 4 (3) 1 pelagic; 3 together offshore in the afternoon.

LITTLE SHEARWATER: 1 Approached the boat to the port side of stern before turning and flying by the port side and not returning.  A probably Little Shearwater was also seen offshore in the morning; this bird was spotted not far off the port side but was lost immediately in glare off the sea surface.

Australasian Gannet: c. 45 (c. 30) c. 45 inshore and on the Hippolytes in the morning, including 1 immature bird; 1 offshore in the morning; 1 pelagic.  No nesting activity noted at the top colony.

Silver Gull: c. 30 (c. 25) c. 25 inshore and on The Hippolytes in the morning; 2 offshore in the morning which followed us out beyond the shelf break.

LONG-TAILED JAEGER: 3 (2) 1 light morph bird foraged in the slick for a while early on then disappeared, only to return briefly later.  A second light morph bird arrived afterwards and was joined by an intermediate morph as we motored up the slick before heading back to port.